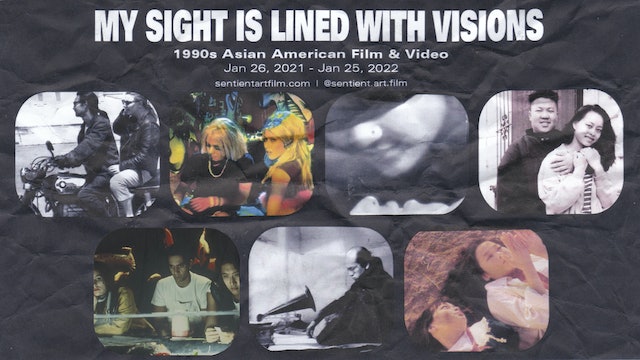 My Sight is Lined with Visions~Package Collection

Our full collection of films from "My Sight is Lined with Visions".
This package includes a 14-day rental period.

The Blindness Series (dir. TRAN T. Kim-Trang; 1992-2006; 140 min.)
These eight short videos explore the many resonances of blindness, from eye-lid surgery, video surveillance, to word-blindness, and brilliantly incorporate the artist’s interventions over more than a decade of sustained practice.

Bontoc Eulogy (dir. Marlon Fuentes; 1995; 57 min.)
Drawing on the Smithsonian’s archive of the “living exhibits” of Phillipinos at the 1904 St. Louis World’s Fair, the only film from Marlon Fuentes nests a narrative of discovering family lore, ethnography of the Igorot, and stylized enactments in a far-reaching inquiry into historical erasure.

Kelly Loves Tony (dir. Spencer Nakasako; 1998; 58 min.)
In this captivating take on documentary co-creation, Kelly Saeturn and her boyfriend, Tony Saelio, both refugees from Laos who grew up in the US, record a year and a half of their own lives as Kelly balances her hopes to attend college, a pregnancy, and her relationship with Tony, an ex-con trying to reform.

Some Divine Wind (dir. Roddy Bogawa; 1991; 72 min.)
A splintering of narrative structure mixed with found and created material depict the life of Ben, a young multiracial man is safely ensconced in his life with a white girlfriend, as he discovers that his father was part of a bombing mission that destroyed his Japanese mother’s village and killed her entire family during World War II.

Strawberry Fields (dir. Rea Tajiri; 1997; 90 min.)
Set in the 1970s, a teenage Japanese American pyro runs away from her repressed and overbearing mother on a cross-country road trip that ends at the site of a World War II internment camp, rendering corporeal seen and unseen ghosts.

Right-click this and copy the link address.

Watch on your Television

Watch on your Computer